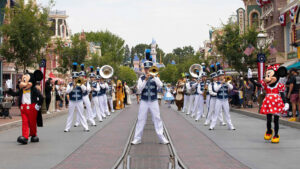 It’s summertime fun time and the magic is at the Disneyland Resort! As Disneyland Resort continues to bring back offerings as part of their phased reopening, here are just some of the favorites to put on summer visit bucket lists at Disneyland park and Disney California Adventure park! It’s a full day of entertainment!

1.Visit Main Street, U.S.A.! The charming nostalgia from the turn of the 20th century brings horse-drawn streetcars, the sweet scent of candy being made and the joyful sounds of the Disneyland Band! The marching band, which began in 1955, is performing once again down Main Street, U.S.A. From there, head toward Sleeping Beauty Castle to walk through the fairytale castle and relive scenes from the beloved Disney classic.

3. Embark on Exciting Adventures! Travel to different moments in time and space, by paddling a Davy Crockett Explorer Canoe or climbing aboard a raft to Tom Sawyer Island, piloting the Millennium Falcon: Smugglers Run at Star Wars: Galaxy’s Edge in Disneyland park, or revving up on Radiator Springs Racers in Cars Land, then teaming up with Super Heroes at the new Avengers Campus in Disney California Adventure park. 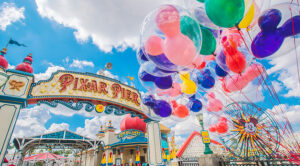 4. Play at Pixar Pier and More! Visit four “neighborhoods” celebrating your Pixar pals in Disney California Adventure park, including the thrilling Incredicoaster, Toy Story Midway Mania! and the Pixar Pal-A-Round. Nearby, take flight once again on the Golden Zephyr, then head to Hollywood Land where the interactive Animation Academy and Sorcerer’s Workshop are welcoming guests back to learn about the art of animation.

5. Try Lots of Fabulous Foods! Sipping and snacking is one of the best ways to spend the day at the theme parks. Several spots have reopened, including Oga’s Cantina, the Tiki Juice Bar, Docking Bay 7 Food and Cargo, Alien Pizza Planet and Rancho del Zocalo at Disneyland park, along with Wine Country Trattoria and more at Disney California Adventure park.

The mobile order service via the Disneyland app is the main way to order food and beverages at many dining locations throughout the Disneyland Resort. More locations are being added and existing locations have expanded mobile order lanes and pick-up windows. We also recommend making reservations in advance for Oga’s Cantina as well as other table-service restaurants. 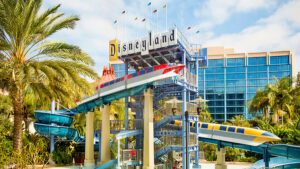 6. Stay! You can stay in the magic a little longer by spending the night at the Hotels of the Disneyland Resort, which just announced summer value offers at Disney’s Grand Californian Hotel & Spa and the Disneyland Hotel saving up to 25 percent on select rooms, July 5 – October 2, 2021!

7. Shop! Discover new merchandise collections and bring home a piece of the magic! Some shops recently reopened, including Pooh Corner in Critter Country and Sarge’s Surplus Hut in Cars Land. Pin collectors, be sure to stop by the 20thCentury Music Company on Main Street, U.S.A., which also carries soundtracks to Disney films! Look for more of everyone’s favorite shops reopening soon.

Before or after a day in the parks, the Downtown Disney District has a unique variety of shops with summer selections, restaurants with fresh, seasonal menus and limited-time photo ops for Guests to pop into! Be sure to check it out!