If you are any level of a Harry Potter fan, a trip to Universal Florida to experience the Wizarding World of Harry Potter is a must-do whether you consider yourself a Muggle, a Wizard-in-Training or a Wizard.

The Wizarding World of Harry Potter is spread between Universal Studios Florida and Universal’s Islands of Adventure. The best way to experience the two different sections is to purchase the Park-to-Park Tickets. I will explain more on why in my must-do list.

The best park to start off to get the full “Harry Potter” experience is at Universal Studios Florida. When you walk through the streets of London and enter Diagon Alley, you almost need to take a few minutes just to stop and take it all in.  So, here’s my must-do attractions for Diagon Alley. 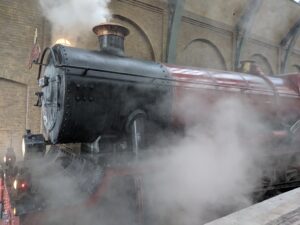 After you spend some time exploring Diagon Alley and maybe munching on a Chocolate Frog, it is time to head over to Hogsmeade. The best way to get there is the Hogwart’s Express. This is where the Park-to-Park ticket comes in handy. You must have one to board the train to go between the two parks on Platform 9 ¾ at King’s Cross Station.

Once you disembark that train at Hogsmeade located in Universal’s Islands of Adventure, again, take a few minutes to just take in your surroundings. There are shops, restaurants, and more attractions! Here’s more of my must-dos.

At some point, I also recommend that you try the Butter Beer. You can get it regular or frozen. I like the frozen version.

Contact us to take the journey to the Wizarding World of Harry Potter at Universal Studios Florida and Universal’s Islands of Adventure to enjoy the above attractions!